If you couldn’t tell by the wild variety of hair colors I’ve had over the years, I’m a big fan of pigmentation.  Okay, maybe the hair dyes don’t really give that away, but as an artist, and even more so as an art historian focusing on ancient cave paintings, I’m definitely fascinated by the different ways cultures over the centuries have created color.

Our modern synthetic paints are capable of being produced in so many hues, but back in ancient times (and even just olden days) pigments for paint and other artistic media came from natural sources.  Mineral pigmentation is very common, and plants have been very popular as well throughout the years.  But did you know there are some crazy interesting pigmentation sources that have been used as recently as the 20th century?

For example, there’s actually a color called Mummy Brown – for exactly the reason you would think after hearing the name.  It’s created from ground up mummies!  When archaeologists started pulling so many mummified remains out of Egypt, pigment producers realized the specific color created by powdering both human and animal mummies made for excellent flesh tones in painting.  Eventually the supply of the pigment source dried up (pun intended) and modern Mummy Brown, when available, is made synthetically, but for a very long time it was legitimately made of mummies.

Another personal favorite is Indian yellow, which was rumored to be made from the urine of Indian cows that had been fed ONLY mango leaves and nothing else.  Indian yellow is a particularly beautiful shade, but according to the stories, it was banned by British rule for being produced through animal cruelty (the cows needed more than mango leaves for proper nourishment).  Again, the modern color exists artificially, and the origin story may be more myth than reality, but there are many other pigments that have similarly interesting backstories! 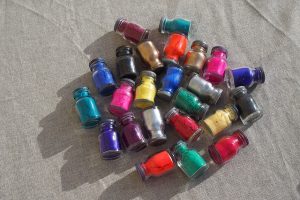 Late last year, I actually had the pleasure of visiting the Indianapolis Museum of Art, which happened to have a special exhibit focusing on the history of paint pigments.  Art can often be dated by which pigmentation was used to make the colors – for example, if a painting uses titanium white instead of another option, art historians can immediately assume the piece was created within the past century since titanium white wasn’t created until the 1920s.

As an artist myself, I hadn’t really taken much time to consider where my colors were coming from when I started painting (despite being an art historian who maybe could have had that awareness on my radar sooner…).  As I’ve been spending more time with the acrylic medium, however, I’ve been learning a lot more about where these colors are coming from and how they interact with each other.  It’s been a fascinating study!  No longer do I assume all reds are the same (just with a little more or less white to dilute them).  Every color is unique, every piece of the spectrum its own bit of magic.

And always, BRIGHTER is BETTER! 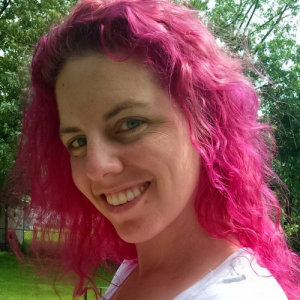